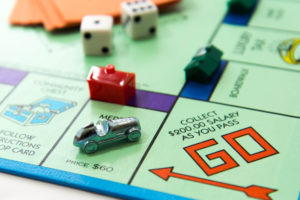 I hope everyone is having a fantastic week so far!  If you find yourself with nothing to do today, celebrate National Play Monopoly Day with me today!  I know what you’re thinking already, “that game takes hours to finish”, but hear me out, if I can knock out 3+ hours of boredom, sign me up! Ask some of your family members to sit and play with you, and make sure you have snacks!  The first monopoly game was created by Charles Darrow in 1933.  It has been created in 47 languages and is sold in 114 countries.  Also, it has been played by over one billion people in our world, crazy right?!  This fact will blow your mind, the longest game of Monopoly set a world record at 70 days! That is competitive determination at its finest.  Since the original game was made almost 90 years ago,  there are now many different versions of the game where you can pass go and collect $200!  A few that I’ve played include Dog-Opoly, Frozen 2 Monopoly, and Minnesota-Opoly.  I saw they now have a Hallmark Channel Monopoly, I’m putting that one on my Christmas wishlist!  Whatever version you have at home, let’s play in honor of this national day! Hey, that rhymed!