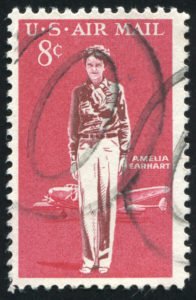 How is everyone’s week going?  I feel like summer is just flying by!  Speaking of flying, tomorrow is National Amelia Earhart Day!  Amelia Earhart is famous for being the first woman to fly solo across the Atlantic Ocean.  She is also known for flying solo from Hawaii to the United States mainland.  That flight, on average, takes about 5 hours.  I can’t imagine flying that far by myself!  Amelia Earhart was born on July 24th, 1897 then, she mysteriously disappeared at the age of 39 on July 2nd, 1937.  She was en route to Howland Island.  Some say she became a victim to the Bermuda Triangle, others say her plane malfunctioned and it sank to the bottom of the ocean.  The conspiracy theories are endless but, no one really knows for sure.  Her accomplishments she achieved in her lifetime will live on forever.  Those include, many more aviation records, and writing best-selling books about her flying experiences.  It would’ve been really neat to fly along side her, I bet she was a pretty incredible lady!  “The most effective way to do it, is to do it” -Amelia Earhart.